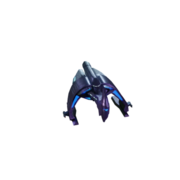 The Swift Heart is the only single-engine cloaking ship in the standard game. This makes it a very inexpensive cloaking scout which you can build in large numbers. Having many of them scattered over planets can give you an information advantage over your opponent, especially with the Super Spy mission. Its fuel tank is relatively large for its size, giving it decent range and allowing it to stay cloaked in orbit of enemy planets for many turns.

Since the Swift Heart is inexpensive, you can mass-produce them and send them behind enemy lines to harass your opponent's weak points. Building a starbase at a Ghipsoldal planet is ideal for building swifties.