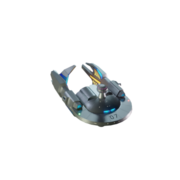 The Loki Class Destroyer is a fairly high-tec light ship with the ability to decloak most cloaking ships within the range of 10 lightyears. It usually does not fight for itself, but with 80kt of cargo space it is a reasonable minelayer.

Privateer, Fascist, and other players who also control cloakers often fear this ship. Usually they will try to destroy it in a kamikaze mission using a cloaking ship's Priority Intercept.

A way to avoid this is to let more than just one Loki Class accompany the fleet, and randomly refuel or tow them, so that they will not be attacked if a cloaker priority intercept occurs.

The Loki requires at least 1 kt of fuel to decloak ships. It will also decloak any of your own ships, as well as your ally's ships (unless those players have loki immunity). If the Loki has 20% or more damage, it will not decloak ships.

The Lizard Alliance and The Solar Federation

Will be destroyed by:

Ranges and fuel consumption were taken from a Loki Class Destroyer equipped with Heavy Blasters, Mk8 torpedo tubes and Transwarp Engines in non-stop-flight.

Battle results are taken from the VCR Simulator in ten runs.

Back in VGA Planets 3, the Loki's tachyon decloak was one of the few hull functions that did not work for shareware players back in VGA 3. This does not hold true for Planets Nu.

The Loki Class Destroyer does not currently have any addon-exclusive abilities.